Except for a gusty wind that woke me several times, I had a warmer and better sleep last night. I climb out of the tent to a cloudless, desert blue sky. Oatmeal, nuts and tea are my fuel for a hike that, at this moment, I am not sure how far will be. I start up the wash where I get my water and continue until I reach an unpassable pass were it not for the two ladders the Park Service has conveniently provided. Without them, it would be a quick mile hike to a fifteen foot vertical wall at the top of the canyon, then back the way I came. Instead, I climb up and over and eventually into another drainage – Big Spring Canyon. 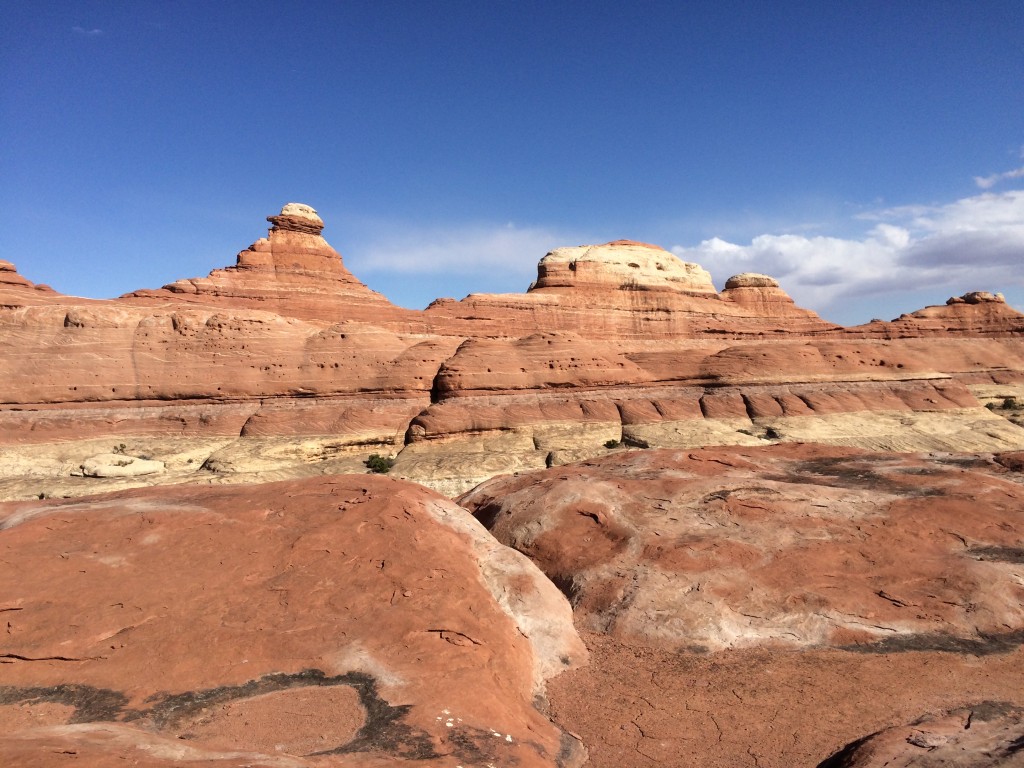 At a high point on the slickrock, I have the choice of turning around for a four-mile out-and-back hike, or continue forward and make an eight-mile loop of today’s trek. The day is young, I am feeling rather young myself (I am only 60, after all) and a lot less sore than yesterday, the clouds that were building a little while ago have melted away. I know of a truly magical spot along this loop, a shaded pool, an oasis in this desert, a great place to eat lunch. Onward!

Interesting that this rock is called slickrock, as it is quite the opposite of slick. My shoes seem to stick to the abrasive sandstone, even on steep sections. Off the unslick slickrock now, my hike through Big Spring Canyon is wetter than I’ve ever seen it. Apparently it was a wet winter, as there are few places along the two-mile drainage where water is not in sight. This is a far cry from the many times I’ve been here with nary a puddle anywhere. The day is warming in spite of gusts that seem to say, “Hey, spring, not so fast – notice the date on the calendar? It is still winter!”

Up and over into another expanse of slickrock punctuated by pinyons and junipers, I arrive at the hidden mini-pond feeling pangs of hunger. Perfect timing! I enjoy lunch serenaded by the music of water constantly dripping into the pool from a seep in the rock. Unlike Big Spring Canyon, I’ve never seen this hidden place empty of water. Roughly thirty feet in diameter and who knows how deep, the pool is mostly shaded by a white sandstone overhang. A few cottonwoods, still in their winter nakedness, grow nearby. I look beyond this hidden wet spot to the landscape I just hiked through – pleasant today but sun-baked hot and bone dry for many months of the year. I am sure this pool is well known to the locals – bobcats, coyotes, mountain lions, foxes, mule deer… 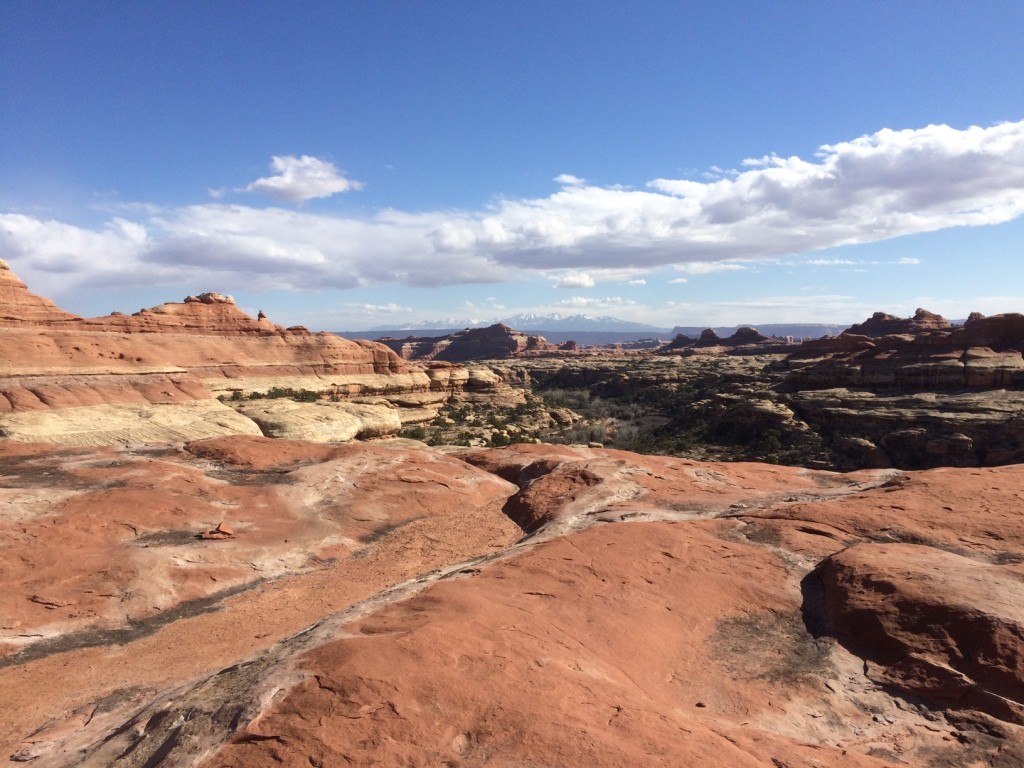 I am glad to be back at camp after a perfect day of hiking. According to the map, I hiked an 8.6 mile loop. I didn’t encounter any more ladders, but there was a weathered gray log with notches cut into it, leaning on a huge boulder, that provided access into a tunnel-like, hundred-foot long slot in the rock that opened up into the upper reaches of Big Spring Canyon. This park is aptly named – Canyonlands! I must say, hiking here is a delight. It has it all: wooded trails – not deep forest woods, but a few tall cottonwoods among scrubby woods of oak and juniper and pinyon; top-of-the-world slickrock hiking; an assortment of wildflowers – even this early in the warm season, a few species are already in bloom, with many more to follow; at least one mountain lion – which I’ve never seen a sign of; and out-of-this-world beauty every step of the way.

Of course, it is hardly out of this world – it is very much a part of this world. And, thanks to a man who loved this wild desert landscape, it is a protected part of this world that has been set aside as a place where people can step away from our increasingly fast-paced society, for a day, a week, a month.  Bates Wilson began lobbying for the creation of Canyonlands National Park in the early 1960s. He convinced Secretary of the Interior Steward Udall that this canyon country should become a part of the nation’s system of public lands, and in 1964 President Johnson signed it into law. The park has grown in size since those early years, and exists so people can experience its solitude, its rugged wildness, its beauty, and so the ecological processes that take place within its boundaries can go about their business protected from our culture’s heavy footprint that continues to have such an impact on the rest of the country’s lands.

The vast majority of Americans believe that our nation’s public lands, such is this park, are a good thing. But not everyone. Just a few weeks ago, a handful of armed militants who believe that federal ownership and management of such lands is not a good thing, illegally took over a National Wildlife Refuge in Oregon. They occupied it for five weeks, calling for the federal government to turn over these lands to local control. Right now, while I sit on this slickrock under this desert sky, those individuals are sitting in jail. Where they should be, as far as I’m concerned.

Yes, most of my fellow citizens and I fully support the idea of public lands. But there are those who would rather these wild places be used not for recreation, education, and preservation of natural values and processes, but opened up for more mining, grazing, logging and other extractive uses. We who love these lands must remain ever vigilant, as there are those who want nothing less than to undo the efforts of Bates Wilson and so many others that worked tirelessly to protect wild sanctuaries like this amazing park. Thank you Bates Wilson, wherever you are (in so many ways, you are right here with me).

I visually explore the red-and-white spires, hundreds of feet tall, which rise from the canyon floor directly across from camp. How long have they been there? I am sure they looked exactly the same eight or nine hundred years ago, when the native peoples that lived in these canyons painted the pictographs that I was admiring on a canyon wall not far from where I am sitting here at camp. There may have been some different plants growing here 12,000 years ago, when the climate was wetter and cooler, and humans first began to cultivate plants and animals for food halfway around the world. But I bet these sandstone spires looked pretty much the same even then. Geologists say these rock formations of Cedar Mesa Sandstone were originally dunes of wind-blown sand and flood-eroded sediments that formed over 200 million years ago. Twenty million years ago, other forces began to fracture the solidified dunes. Millions of years of erosion by wind and water worked those cracks and fractures into the sculpted pillars that I am looking at now, on this late winter 2016 evening, two days into my 61st year. 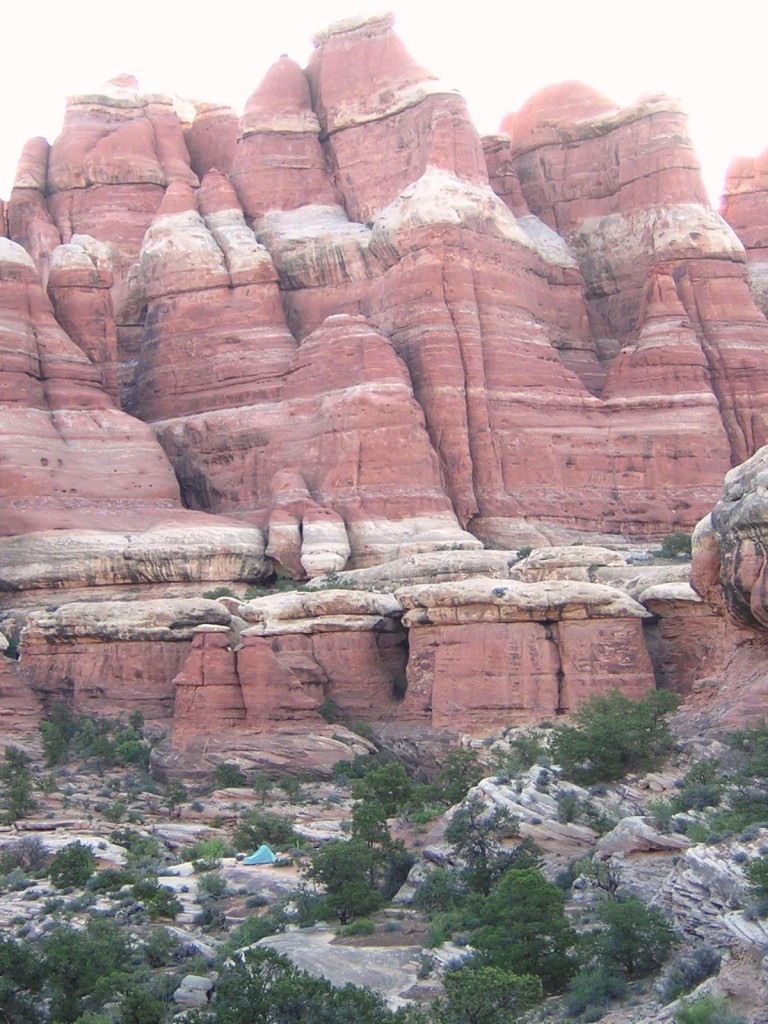 There is a feeling of, what is it – silliness? absurdity? – to sit among these ancient rocks and reflect upon my briefer-than-brief 60 years of being alive on this planet. Then again, the short little speck of time that is my life is all I’ve got. It brings up a range of feelings to be here at this time in the middle of this magnificent landscape – humbled, joyous, inspired, awe, insignificant. I sit as quietly as the canyon is on this late afternoon. Lines from a Mary Oliver poem that I’ve been trying to memorize emerge out of the quiet:

Tell me, what else should I have done?

Doesn’t everything die at last, and too soon?

Tell me, what is it you plan to do

with your one wild and precious life?

Yes, from one angle, my life can seem small and insignificant in the face of this ancient stone. Then I am reminded of how the life of a high school dropout, a dryland cowboy, was able to convince the Washington DC power brokers to get behind this crazy idea of making a national park out of this God-forsaken landscape, as many people considered this place. I suppose Bates Wilson could have looked at his smalltime, western cowboy life as never being able to have much of an impact beyond his little red dirt world. Fortunately for the rest of us, and for this magical landscape, he didn’t.

When considered against the geologic time represented in these rocks, I suspect that what Wilson or any of us accomplish will probably always seem like a speck of meaningless dust. But, when considered within the realm of our country’s history, the foreseeable future of this land, and a good many handfuls of human generations, Wilson’s efforts are hugely significant. It’s a bit of a paradox, how being here can conjure feelings of insignificance, which can be disempowering. But if applied appropriately, that feeling of insignificance can lead to humility, perspective, not taking oneself too seriously…all good things – for individuals, for a society, for our species. Being here can lead to empowerment – empowerment that comes from meeting the physical challenges associated with getting around this place, or the psychological challenges that a few days of wilderness solitude can provoke. And, being here can also lead to a sense of hope, something that often seems, at least to me, pretty hard to come by as the 21st century unfolds. Along with a capacity for so much destruction, greed, and disregard for so much and so many, the fact that this little corner of the planet has been deliberately set aside as a place protected from ourselves – a place where we actually choose to put limits on what we could do to this place, but choose not to – is a reason for hope. Yes, being here makes me feel hopeful.

The sun sets while I take a leisurely stroll up-canyon. Unlike last evening, the sky is completely cloud-free tonight. The wind has diminished to a few gusty breezes. The air does feel much colder than it did the last two nights. Maybe I will wear an extra layer tonight. Without any clouds, the slightly larger sliver of moon is desert-sky clear as the evening slowly begins to darken. Still no stars. Soon!

I plan on rising early for a quick start to what will be a long day. The hike out of here will be the pleasant part. Sorry sciatic – we have that same drive to do in the opposite direction tomorrow. As quick as it started, my wilderness retreat to say good-bye to my 50s and hello to my 60s will soon be done. But it’s not done yet! On the many hikes I’ve guided over the years, I would often say to my group of hikers towards the end that the best part of the hike – like some cool animal sighting, or something unexpected – could still be ahead of us. The same holds true right now – I still have a night to spend in this amazing desert wilderness, plus what I expect to be a very pleasant early morning hike. Who knows what will happen!