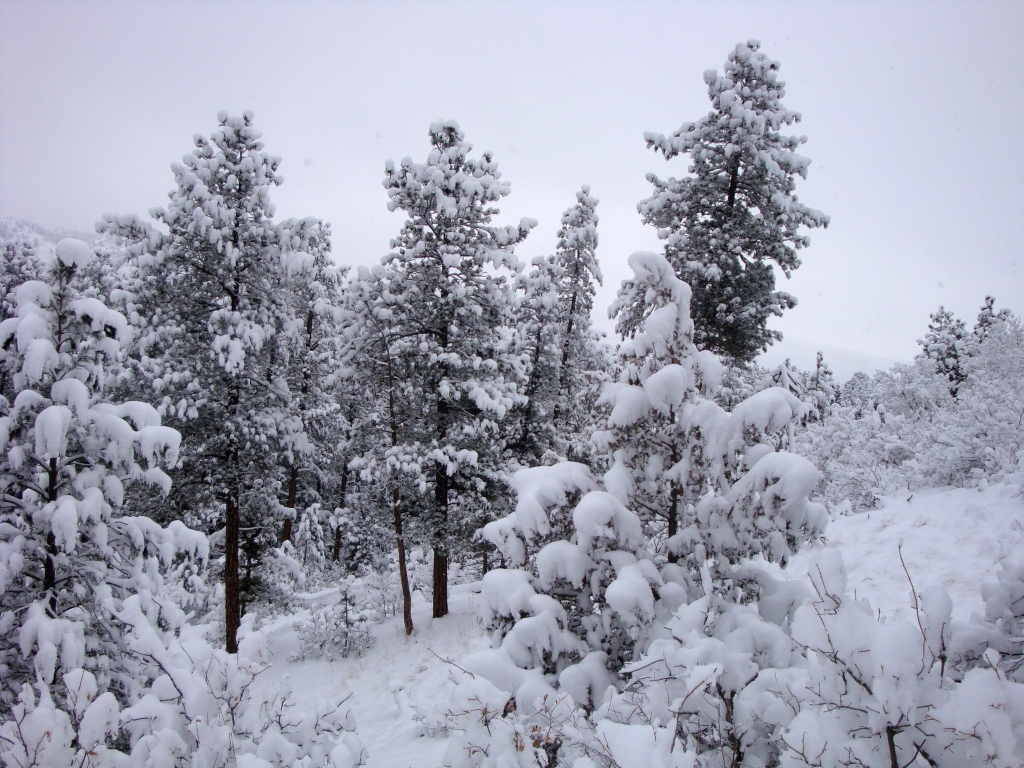 A lone snowflake drifts out of a slate-colored sky and finds its way onto the page of my journal that I am writing on. A woodpecker squawks.

I trudged through over a foot of new snow to get to this somewhat protected place along a path I have walked a thousand times. In precipitation of every variety, in sunlight, in moonlight, in violent winds that brought down trees, in every condition have I walked that path. Today, I walked it as it wound through a world magically transformed. Yesterday it was a late fall landscape of browns and grays. Today the land is covered in a fresh blanket of pure white.

A small band of juncos flits by and disappears into the branches of a Rocky Mountain juniper. I can no longer see those busy little gray birds, but the dense evergreen foliage, dappled white with snow, is alive with their many tiny calls, squeaks, and clicks.

The storm’s prolific snowfall was a surprise to wake up to this morning. After nearly an hour of shoveling the snow from the various walkways around my property, its heavy wetness is now well imprinted on my tired arms, shoulders and back. The sky appeared to be in the early stages of clearing out while I was shoveling earlier today, but the little bit of blue sky was soon covered again with ominous looking snow clouds.

After a night of heavy snow, it snowed lightly all day, but that one snowflake that landed on this page a little while ago was one of the storm’s last. The snow clouds now appear to be breaking up for real. The western sky is beginning to be dressed in fair weather clouds, backlit by the late afternoon sun. The temperature, which hovered in the mid-thirties all day, feels like it is dropping. I’m beginning to cool down. I’ll be moving along soon.

A chickadee calls from a ponderosa pine, its branches covered in what look like overly generous dollops of whipped cream. This landscape is a picture postcard of peace and beauty. Except for the birds, it is absolutely silent. I stop writing and take it all in. I hear the sound of a crow or raven, coming from above. I look up and see dozens of crows, widely spread and flying out of the north. (I can tell they are crows and not ravens by the continuous flapping of their wings. Ravens usually flap once or twice, then soar.) I notice that the backdrop of sky has a larger percentage of blue than it did just a little while ago. The sun has slipped behind the western ridge, and the clouds have turned a peachy yellow.

I am moved by the sublime perfection of this moment. I pause and realize it is more than a moment. The whole time that I’ve been sitting here, writing, experiencing the winding down of the storm, watching a fair weather sky move in behind the storm, has been nothing short of magic. Just as the sky has morphed from looking gray and mean into a gentle peaceful sky, I too feel completely different than when I sat down here a short hour ago. Not that I was pre-occupied, or keyed up, or feeling burdened when I first arrived, but being here has filled me with a deep calmness that I cannot help but notice.  Magic!

I also notice that the dropping temperature has me feeling downright cold. Time to move on. I put on my pack and notice that the clouds are now pink. A crisp, cold evening is well underway, and I cannot think of another place I would rather be. As I head down the path, I say out loud into the cold evening air, “Winter has arrived. Welcome!”